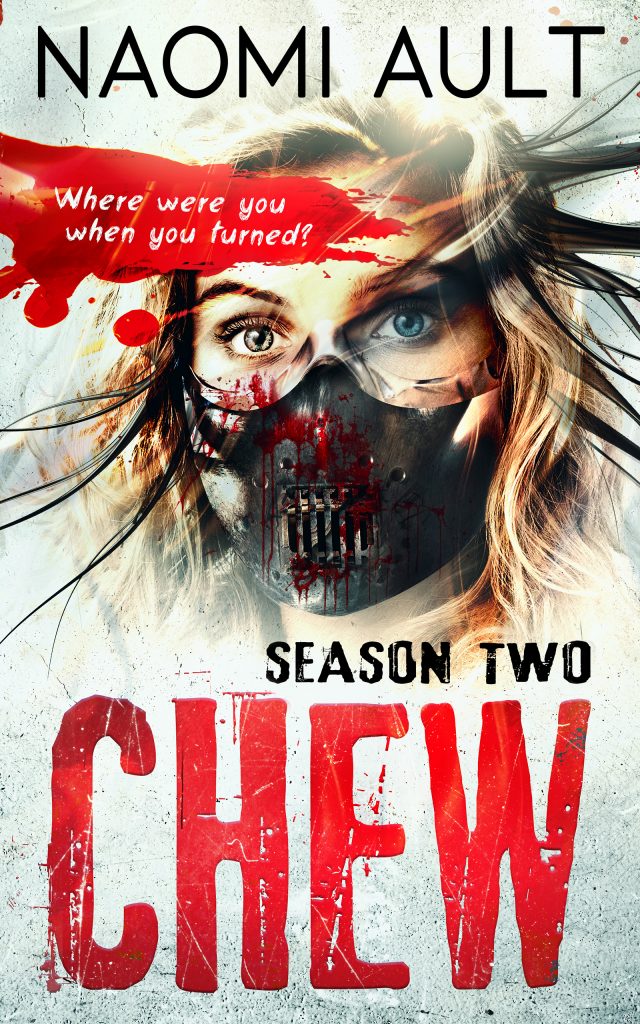 Only the strongest survived the Flip.

The problem is that it's hard to remember what they're surviving for.

The world is still reeling after Zakaria's miracle cure transformed flesh-eating monsters back into humans. Under constant threat of pain and punishment, Biters are forced to work off their debt to society, and only the strongest can survive this new normal.

After surviving Clive's Carnival, Luke and Allison trade hasty goodbyes and part ways. While Luke adapts to military life, Allison returns home to Milltown, Ohio—a city Will promises to turn into a promised land for all Biters.

Meanwhile, one calamity after another tests Allison's resourcefulness, her will to survive, and eventually, her humanity itself.

Once you've finished this book... Join Lazarus, an online community for horror lovers. Stay up to date on news, contests and other Chew related events PLUS interact with other horror lovers to discuss your favorite horror media (books/movies/etc.)

Chew: Season Two picks up virtually where season one left off. Allison, Kid and Will have parted ways with Luke; with the former heading towards Will's grand plan for a biter community; and the latter heading off to join the army after being drafted. I'll admit, I was super worried about Georgie, but for now at least, he's been taken care of and my anxiety has eased. I've become so invested in Al, Will and Luke's stories, and the added depth that their characters got in this season was phenomenal. Kid as well, it was just a small thing, but I feel like it speaks volumes and I have my theories about a certain thing she's been able to do. I loved the character growth in Luke, where before he was pretty agreeable and seemed a little less confident in his abilities and the decisions he had to make, in this instalment he really grew a back bone and started standing up for himself, and what he believes in, he also really took a leap and acknowledged his ability in the medical field which was great to see. I also enjoyed the addition of Austin's character, and I'm hoping that we get to see a little more of him.

The story has also taken a deeper dive and things are starting to come to light that are gasp worthy. Some of the hints of things that were mentioned here are really showing that it's just the beginning for where this story is headed and that there is so much more than meets the eye. It's made for fantastic story telling and I am freaking hooked! Also, that ending, my god. My heart. It's not often that a book can elicit a strong emotional response from me, but that last paragraph, whoa. And that just lends truth to the fact that, there is so much more going on here than meets the eye and I plan to be there every step of the way while we uncover what that is.

Ault truly is a master of her craft. I applaud her for her ability to write flawed characters that have so much depth; character relationships that are believable and real and so layered, that rip your heart out and have you hoping for the best for all; and her ability to weave such an amazing story that really keeps you glued to the page. I could not put this one down, and the same ended up being true for volume one as well. The slow realisation of what is really going on and the theories that keep running through my head will have me thinking about this for a while to come. I'm looking forward to Volume three, and it can't come soon enough!

There should be a sixth star for such brilliant page turners! When not only all the components of a great book come together (stunning story, fascinating characters, perfect pacing, thrilling story, great writing), but there is also an abundance of deep psychological insight, giving the book a grim realism which can shake you to the core. The second installment of Chew is all of that and much more: it brings the story forward, into unexpected directions, turning the series into top-quality post-cure zombie horror! Luke, Will, and most of all Allison, can, and probably will, break the reader's heart. There's so much mystery, so much going-on in the backstages, I couldn't stop reading. I wasn't simply drawn in to this troubled "family" trying to survive after the apocalypse has happened - I was riveted! And, as Part II of Chew shows, the zombie apocalypse hasn't happened yet. For those who prefer their horror realistic, unpredictable and never, absolutely never, boring, Chew is a must-read!

I received an advance review copy for free, and I am leaving this review voluntarily.